Over three decades Matt Bouttell has viewed aviation from the maintenance hangar, the dispatch office, the regulator’s ‘ivory tower’ and the cockpit. What struck him most in this varied career were the common elements, rather than the differences. Bouttell was recently appointed to lead Recreational Aviation Australia, an organisation he says plays a vital part in the development and reputation of all Australian aviation. Here he discusses his goals as CEO.

I’ve just ticked over 30 years in the aviation industry, which began as an apprentice engineer at Qantas. Now, to have the opportunity to take a leadership role in an organisation is a bit of a dream, I suppose. And being a pilot and an aircraft owner, I’ve always really enjoyed working with the general aviation and recreational aviation crowd and I thought I could offer a lot in this role.

RAAus is a sub-set of the industry but we’re a very big player, therefore, we need to get away from the ‘us and them’ mentality – we’re all playing in the same sandpit. I’m really excited about trying to change that conversation.

We’re all playing in the same sandpit.

We all have a role to make sure we’re safe and that it’s feasible to play safely with little aeroplanes. I call them little aeroplanes but many recreational aviation and general aviation aircraft are highly complex machines and form part of a vitally important sector in our economy. For example, if there wasn’t general aviation, there wouldn’t be enough LAMEs to service commercial aviation. I feel the same about recreational aviation – it provides people with the opportunity to get their foot in the door and work their way towards whatever they may choose to do, either commercially or just for fun.

In the past you’ve found your major career changes have coincided with catastrophic global events – 9/11 and the pandemic – but you emerged unscathed. Even so, are you hoping for less upset and recovery this time?

True! But I’ve been very fortunate that my career has been diverse, from – literally – nuts and bolts to high-level planning.

At Qantas last year, I was really lucky not to be stood down. In fact, I was doing two jobs – because I had such a diverse skill set, I was able to be a jack of all trades. I was involved in the drawing of the kangaroo [for the last flight of a Qantas 747] and repatriating Australians during the COVID-19 pandemic. Then the job at RAAus came up. I had achieved a lot at Qantas (during three different stints) and with the recreational sector powering along, it presented a lot of opportunities.

Does that experience help you now?

Hugely. What I’ve found over the years is that I’ve got such a broad understanding of the industry therefore I can piece the puzzle together in my head to see where other people are coming from. I think that’s a really important skill because, too often, our industry leaders assume they know what the other person is thinking when in fact if they haven’t experienced it its difficult to be empathetic.

What’s the most important safety issue for RAAus?

Obviously, SMS [safety management system] is really important, but I think we need to be very cognisant of the fact that when people are doing this stuff for fun, we don’t want to overcomplicate it. We know that as soon as you mention SMS, some people get scared off, so it’s got to be a lot more practical. For me, it’s about being pragmatic so, without calling it an SMS, let’s just learn from our mistakes without blaming anyone and make sure we have barriers in place so we don’t realise a catastrophic event. That’s my take on SMS.

Probably my overarching safety message is that, while RAAus operates on an informed participation concept – with (mostly) self-declared medicals, aircraft that meet standards but aren’t necessarily certified – we still need to ensure that when we’re playing in the sandpit with those people who are moving uninformed participants around – such as the airlines – that we actually play our part and recognise and respect other peoples’ right to be safe.

We have lots of members who prefer not to fly in controlled airspace. We’ve got lots of people who just want to go for a burn in their aircraft, go for a $100 hamburger over the Great Divide or east of Perth or whatever it may be. They just want to go from A to B safely and enjoy themselves because they’re doing it for fun. We’ve got to recognise that – we’ve got a very diverse membership and we are very aware of that.

The regulations allow us [in RAAus] to do certain things that are not allowed if you have VH on the tail – that’s a privilege we have. It’s a really important thing for our members to have, but what comes with that is responsibility to recognise the increase in risk is to ourselves, not to others.

Are the principles of SMS – a reporting culture, an honest and open culture – equally as important in RAAus as they are in Qantas?

Yes. Safety improvement is something we should all be striving for and by having a good safety culture we will get better – this applies equally throughout the industry. We also need to realise that some kinds of operations – such as flying an LSA aircraft out in the bush – are going to have a different risk profile to an airliner. The controls you put in place are going to be different compared to an east coast CTAF, for example. Assessing risk is very important.

I like to think RAAus isn’t just about bringing people in to make them career pilots. We have multiple reasons in our sector. One of those reasons is that aviation is almost comparable to something like the Duke of Edinburgh Award scheme, for example. In aviation you gain so many skills, such as leadership, situational awareness and risk management. That is, there is a benefit that comes from the discipline so, for a young person, it provides a great basis to go forward in whatever career they choose and, let’s face it, have some fun on the way.

There’s nothing better than going to a fly-in, seeing everyone get out of their aircraft and pitch their tents and go and have a cup of tea and talk about the flight in or whatever it may be. That’s a really important part of our community and our movement.

We need to be true to our roots. That is, we need to continue being diverse in the aviation activities we support, be it trikes and powered parachutes through to highly complex LSA aircraft. Success to me is our ability to influence the broader industry to work together and recognise the role we each play, so we have a greater understanding and we can work through challenges.

That’s a really important goal of mine in this job. Having worked as industry relations manager at CASA and seen so many different factions across the industry, it’s extremely important to me that I don’t become part of that and I play a role to unpick it.

So success will come if all organisations pull in the same direction?

Everyone has got self-interests – it’s a natural part of life – but that respect is really important because a great outcome might be when everyone gets 80 per cent of what they want. I think there are so many mutually exclusive segments within our industry that it’s nearly impossible that everyone can get all of what they want.

We all need to come together and work out what is the acceptable risk appetite in each area and how do we get to a happy enough place. I think happy enough is probably the best we will achieve but all of us need to be willing to accept that as well.

We’re just trying to do life and a big part of our lives involves aviation, so let’s all try and do it well together. As I say, I really see an opportunity for me in this role to influence that more broadly. 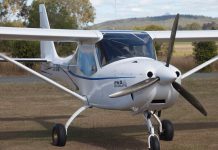