Home Audio Past the point of no return

My life didn’t flash before my eyes, nor did I have a sense of impending doom, but it was a landing I was sure I could do, right up until the moment of impact. And, like many aviation incidents, it can be put down to human factors.

It was February 1997 and I was competing in the NSW Hang Gliding State Titles, held in Manilla, a small country town near Tamworth. I was flying a high performance wing, 155 square foot Moyes XS, complete with 95 per cent double surface, in-flight variable geometry, drag-shedding elliptical wing tips and a full mylar top surface. It was one of the slipperiest wings on the hill.

I was an experienced hang glider pilot, with over 200 hours in both intermediate- and high-performance wings. I was also a qualified GA pilot, with a respectable number of hours, plus I’d flown ultralights for years.

Like many other 20-year-old males, I arrived at the competition full of enthusiasm hoping the days ahead would be filled with epic skies and epic nights. And I wasn’t disappointed.

I was with a group of equally cavalier mates and we’d joked about the benefits of pub living, and how it maximised our performance. And like moths to a bug zapper, we’d gather at the bar each night, jeering at those who called it a day, after their salads and water.

Night after night, our group propped up the bar and shared ever increasing tales of glory. Then one by one, we staggered to our places of rest, reincarnating ourselves late in the morning as functioning aviators, but not before lining our stomachs with grease and coffee.

Despite treating my preparation with such recklessness, I’d always set up my glider, attend the pilots’ briefing, plan my flight and conduct pre-flight checks. And finally, somehow, manage to present myself clear-headed to the launch marshals, right at the perfect intersection of available daylight and favourable lapse rate.

In fact, in spite of the late nights, poor diet and the odd ale, my flying saw me well within the top ten on the second day of competition. But like most of these situations, I slipped into the final hole in the proverbial Swiss cheese.

The task for day three was a race to a declared goal, via a single turn point. This meant launching from Mt Borah in North Manilla, getting some altitude before the start, then tagging the start cylinder, which means taking an old-school photo of a declared landmark over Wimborne. The task was then to head east for about 30 miles to the turn point at Bendemeer, tag the turn point marker, and then fly north-east another 30 miles to the goal paddock at Uralla. 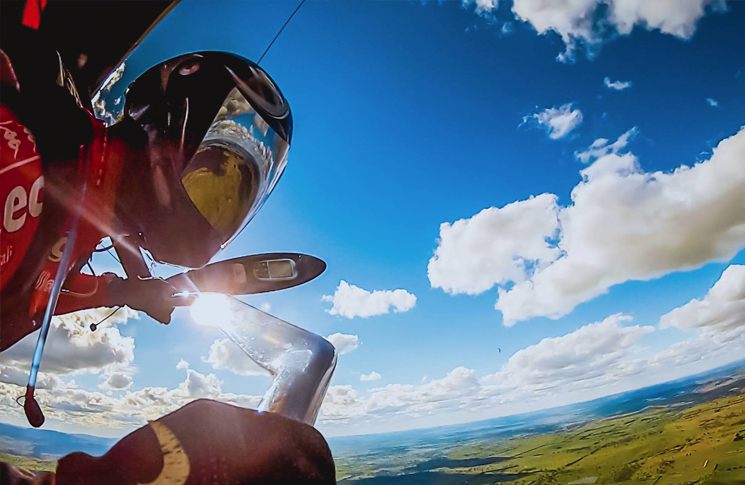 Launching into increasingly gratifying lift, I was quickly swept away from the hill in the company of a modest gaggle of fellow fliers, and shortly after tagging the starting line, I was cooling my heels at the top of an 8000 ft, bubble of warm air and promptly established on my first glide. The course took the competitors along a fairly narrow valley riven by Halls Creek. Ordinarily, the fringing hills of such a valley would yield an abundance of lift and a healthy profit of altitude, at least on days when a brooding overcast sky has not infected the sun’s heat with a far-too-early malaise. With a growing sense of foreboding, I watched as scattered cumulus cloud began to languish beneath the slow and almost sinister march of altostratus from the west. Minute by minute, the day was switching off, before it had begun.

In the world of hang gliding and paragliding, and dare I say the art of sailplane flight, a good rule of thumb when searching for lift, is firstly to look for raptors or fellow fliers circling nearby. Secondly, if closer to the ground than cloud base, search for ground triggers. Thirdly, and if you are lucky enough to be nearer cloud base than the ground, look to the next cloud. Fortunately for me, or so I thought, I spied another wing at the end of a dead-end valley, circling.

So, here I was, at a crossroads. Should I take the well-flown path of other competitors and fly the safe, but less productive, Halls Creek valley, or roll the dice and join the circling pilot trying their luck at the end of the dead-end valley? In that moment, fatigue, overconfidence and pressure to perform all conspired to compel me towards a fate that was both humiliating and expensive.

It was an ambitious glide to that elusive circling wing. On reflection, it was probably a glide of 10 to 1. And I should point out that the behaviour of a hang glider in ‘scratchy’ low level (<500 ft) lift is remarkably similar to that of a glider performing a tight-field landing approach; that is, a sequence of 360-degree turns over the final approach point—think ‘high key–low key’ forced landing approaches in a powered aeroplane.

Unfortunately for me, it was well and truly the latter—the glider was circling to land. The air was so devoid of lift, it felt like a hot knife sinking into soft butter. Not a bump. The whole ignoble situation was made even worse, as I couldn’t stretch my glide to the other pilot’s landing field. And my half-hearted poorly selected plan B, was strewn with powerlines.

It was at this point that my addled brain coughed up its most fetid pool of long-lost facts—if Europeans can routinely land tailwind up the side of a hill, how hard could it be for me to do the same?

Quite hard, I can confidently say now.

I found myself riding a five-knot tailwind at roughly 18 knots, towards a slope of 40-degrees up. I was primed and ready for a spectacular demonstration of what is commonly referred to as a ‘fly-on-the-wall’ landing. Properly executed, such a landing begins with an uncomfortably early flare, which relies on momentum and slope to compensate for an angle of attack well in excess of 17.5 degrees.

The alternative—the ‘bug-on-the-windscreen’ landing—was in fact the technique that I ultimately demonstrated. It requires no attention to the timing of the flare, but would typically benefit from having an indestructible airframe and full body armour, neither of which I possessed. The interesting thing about this method is that it’s not until the moment of impact that the criticality of flare timing truly manifests itself. And with that, my flight came to a painful end.

I was alive. Sad, sore and sorry—I gradually I checked myself. Firstly, I tentatively stretched my arms out, slowly turning them over, they had the appearance of raw pepper steak, and my right thigh was severely corked—I feared it was broken, but luckily an X-ray proved otherwise. After radioing for help and being rescued by good mates, I took the time to reflect. My glider was completely and utterly destroyed. So, other than the fact that good friends are a precious commodity, what did I learn?

Clearly, boozy nights and dreadful nutrition don’t aid your next days’ performance, and overconfidence can blight even the most seasoned pilots.

But for me the greatest lesson, no matter what wing is carrying me, are the sins of ‘get-there-itis’ and they take many forms. Sometimes, it’s the pressure of making sure the hire aircraft is returned to its home strip in fading daylight. Other times, it’s the pressure of making good on a promise, despite VMC minimums facing you on every front. In my case, it was the pressure to push myself higher up the competition rankings, egged on by the ego and a trail of bad decisions. The old adage runs true—best to bail early, and live to fly another day—or in my case, many, many other days!