Home Feature The heat is on

As we approach summer, it is time to consider the effect heat has on helicopter performance.

The 80s song ‘The Heat Is On’ was the theme for the Beverley Hills Cop movie. Apart from a catchy music video featuring some impressive hair styles, it also had some prophetic words in the opening verse about the relationship between hot temperatures, high pressures and staying alive in a helicopter.

The heat is on, on the street
Inside your head, on every beat
And the beat’s so loud, deep inside
The pressure’s high, just to stay alive
‘Cause the heat is on

Here are some examples of helicopters operating in hot temperatures.

An R44 helicopter was operating to Mount Buller in the Victorian alps in November at close to maximum weight. The Mount Buller helipad was at an elevation of 5400 feet. The helicopter ran out of power on approach to land and overpitched the rotor, resulting in the helicopter landing hard and rolling onto its side.

Another R44 helicopter was operating in an out of ground effect (OGE) hover looking for a landing area near Katherine in the Northern Territory with one passenger on board (aircraft gross weight unknown). The pad elevation was approximately 430 feet and the temperature was about 40°C. There was a slight tailwind and the pilot departed the hover, lost effective transitional lift, ran out of power, overpitched the rotor and substantially damaged the helicopter in the hard landing.

Another R44 helicopter was operating in north-western Queensland in November. When taking off at near maximum all-up weight, the helicopter lost performance as it left in ground effect (IGE) for OGE and the wind changed. The helicopter descended, contacted the ground and rolled over. The elevation was 430 feet AMSL, QNH 1010 hPa and the temperature was 38°C. The pressure altitude was 650 feet when the pilot lost performance and, although taking off into wind, the wind was gusting and variable in direction.

All current aviation engines rely on mass flow through them to produce power. The lower the mass flow, the less power is produced. In the case of a piston engine, the less air into a cylinder, the less fuel that will be metered with it and the lower the charge that will be expressed on the piston. Lower density results in lower engine power output.

It is often better to talk of density altitude in effecting engine performance, as high altitudes also result in lower air density. Sea level density in the units normally used for manifold pressure is 29.92 inch Hg; 1 inch Hg is lost for every 880 feet of altitude climbed. The humidity and QNH also effect density altitude (1 hPa = 30 feet).

However, there are ways around this. The engine can be super- or turbocharged to ensure the same manifold pressure is available at a range of heights. An over-powered engine can also be installed and operated at lower power.

At lower altitudes you may need to limit the manifold pressure manually, as too much pressure can be forced into the engine (over boost). As the density altitude increases, there will come a point where the engine power starts to decrease as the super- or turbocharger cannot increase the reducing atmospheric pressure at altitude back to its sea level rating anymore.

An over-powered engine eventually reduces power to a point where the throttle is fully open and the engine output starts decreasing. In both these cases, the term ‘full throttle height’ is used. There is a caution in the R44 flight manual that states that at high power setting above 4000 feet, the throttle is frequently wide open and RPM must be controlled with collective.

If you look in the R44 flight manual, you will see the Lycoming O-540-F1B5 engine has a nominal rating of 260BHP @ 2800RPM. However, when installed in the R44, the maximum continuous rating is 205BHP at 2718RPM (102%) and five minute take-off is 225BHP at 2718 RPM (102%). The engine is de-rated by pilot-imposed limits. This means that it will produce the flight manual-rated power ratings above sea level altitudes.

Consider the basic lift equation: L=1/2CLpV2A. Given the rotor is at constant speed, as we gain height, the only variable changing will be the air density, which decreases. In order to provide the same lift off the blades, the coefficient of lift will need to increase. This is done by increasing the angle of attack through increased blade pitch. We know from blade element theory, this will tilt the total rotor thrust back. This increases the rotor drag component and, hence, more engine power is required to oppose this and maintain main rotor RPM. Increasing density altitude requires more power to drive the rotor system.

With these two previous thoughts in mind, then you should expect to require, first, more power and, second, have less power available, if you were to conduct a landing at high density altitude. The R44 flight manual gives you tables that show where you can hover IGE and OGE at varying altitudes, temperatures and weights.

The higher you go, the less weight the aircraft can operate at.

Considering the IGE chart, we can see the Mt Buller aircraft would have had IGE hover performance at around 25°C and the other two helicopters had the performance to hover IGE with a margin of excess power available. Unfortunately, in these three cases, the helicopters were not in an IGE situation when they found out they had insufficient power.

In two of these accidents, we can see what goes wrong when the wind conditions change or the rotor droops, reducing its ability to create thrust. Even small changes in disc attitude to correct position or counter an aircraft drift may cause the helicopter to settle.

On an OGE vertical approach, you will also need some power in reserve to arrest the descent rate. It is probably wise to apply a margin onto the weight given by the graphs to account for pilot mishandling or varying wind and atmospheric conditions. 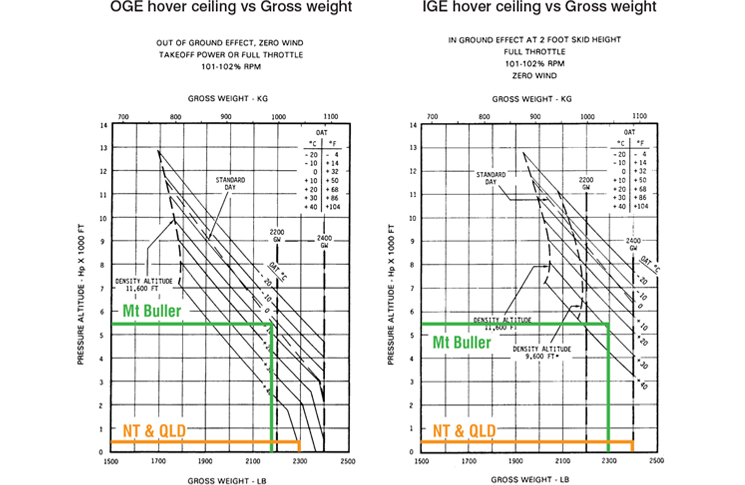 On smaller torque-limited turbine helicopters, this might mean that for an OGE pad you may want a 3 per cent torque margin above the OGE hover torque requirement.

Larger multi-engine helicopters might use a mass margin. For example, they may require the aircraft to operate 100 kg less than the weight specified in the OGE or IGE charts when conducting a take-off or landing. These limits will often be specified in the company operations manual. Operating at the limit without any margins may not be wise.

Reducing weight is one option but you can also change your style of approach. If you only just have OGE power on a gusty day, then it may be better to conduct a departure making sure you are well through effective transitional lift before you lose ground effect.

On approach if you only just have OGE power, then you may need to ensure you are entering ground effect before you slow down below ETL. This also means you need room to conduct a shallower approach and decelerate while in ground effect. You can’t use these techniques descending vertically into a hole in the trees. Similar buffers and techniques may need to be applied if you are approaching IGE limits.

Higher-density altitude also means there is a difference between true airspeed (TAS) and indicated airspeed. The higher TAS means the aircraft has greater momentum than it would at sea level. Operating over high terrain and high temperatures means more time needs to be allowed to slow down to your landing pad. If this isn’t anticipated, then a more aggressive stop is required at the end, with larger power demands to stabilise the helicopter in an already limited power situation.

Operating a helicopter over high terrain and high temperatures means more room needs to be allowed to turn around. If this isn’t anticipated in a valley, then the pilot will tighten the turn to avoid terrain, increasing power demands and slowing the aircraft down to the point where the helicopter may not have enough power to maintain level flight.

So, as summer approaches and ‘The Heat Is On’, remember to consult your performance charts, apply sufficient margins or modify your style of approach and allow for the increased momentum and turn radius of your helicopter.

It is also worth noting that comments were made in these accident reports that the helicopters were fitted with bladder fuel tanks and ‘despite the hard landings and substantial damage there was no post-impact fire’.